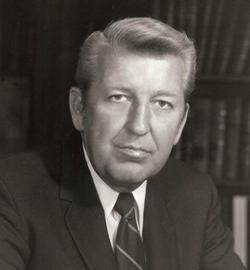 An Army Veteran of WW II serving from 1943 until 1946 in the 48th Tank Battalion
14th Armored in France and Germany under General Patton. A Graduate of Washington University and Washington University School of Law, State Senator of Missouri''s 22nd District from 1958 until 1974, Circuit Court Judge in Jefferson County since 1991. He practiced Law in Hillsboro Missouri for over 50 years. He also was an avid outdoorsman,who loved to hunt and fish.