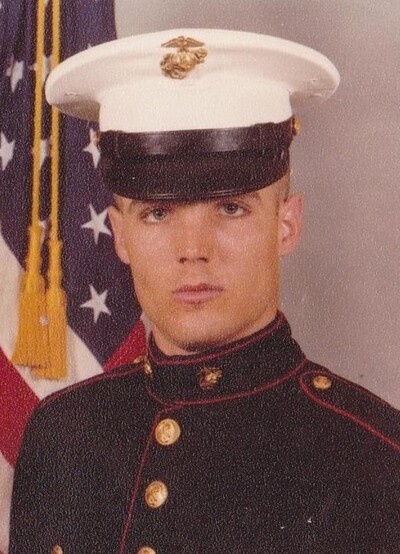 Beloved son of Juanita and Richard Orchard, Brother to Greg and (Sandy) Orchard, loving father to Emily (Joe) Orchard, Kaylee (Collin) Ijames, and Molly (Colton) Cook. Grandfather to Oscar Wallace Ijames. Uncle to Kyle and Katie Orchard and their two children Jace and Ava, Uncle to Heather (Korey) Teer and their children, Aliyah, Landen and Connor. Significant other to Cathy Davis (his God sent angel), friend to many including myself Roger and wife Bonnie.

Ron was a United States Marine to which he held his service to his country as a thing of outstanding pride. He was a Jar Head through and through. Ron grew up with the loving teachings of his parents and the Church of Christ, He was a man of conviction and strong personal character, he knew what was right and what was wrong, there was no middle of the road, he knew the difference, you did not have to guess where he stood.

Ron owned and operated Off the Hook restaurant in De Soto, for over ten years. He was able to give many young teenagers their first job, he was always there for them. He supported any charity that needed a donation of food for their cause such as, Food Pantries, The Hillsboro Community Center, and for the Late Jim Sucharski’s annual Christmas Dinner for those in need.

Death leaves a heartache no one can heal, love leaves a memory no on can steal, never leave I Love You left unsaid.

A graveside service will be held at Jefferson Barrack’s National Cemetery later.

To order memorial trees or send flowers to the family in memory of Ronald James Orchard, please visit our flower store.