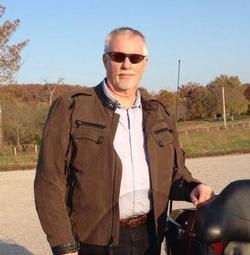 Rickey “Rick” Harold Blase, age 64, of Hillsboro, Missouri, passed away on March 23, 2017, in St. Louis. He was born November 22, 1952, in Kirkwood, Missouri. Rick was an investigator for Wells Fargo Bank, U.S. Army veteran, member of Good Shepherd Catholic Church, an Eagle Scout, and former Boy Scout Leader for Troop #992. He received a Bachelor’s in Computer Science from Fontbonne University. He was an avid motorcyclist, writer, and photographer.

Daughter-Camille A. Blase, of Pacific, Missouri

Our dear uncle cousin and friend.

Memorials to: Birthright would be appreciated.

To order memorial trees or send flowers to the family in memory of Rickey "Rick" Harold Blase, please visit our flower store.