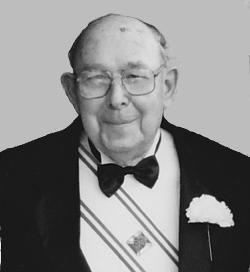 Richard R Creamer Jr. age 91, of Festus, Missouri, passed away on Saturday, November 22, 2014, in St. Louis County, Missouri. He was born May 24, 1923, in Houston, Missouri. He was the son of the Late Richard R. Sr. and Elizabeth M. Creamer (nee Schulen). Richard and his wife Myra were married March 20, 1943. Richard was a member of Good Shepherd Catholic Church Hillsboro, Missouri and Knights of Columbus # 6401 and was a Fourth Degree member of the Knights of Columbus Assy # 567. He was an Iron Worker for Stupp Bro''s and Business Agent for the Iron Workers Union. He retired as Director of Facility Maintenance at Children''s Hospital in 1985.

In addition to his parents Preceded in death by:

Friends and family are invited for food and fellowship at the Knights of Columbus # 6401 (Hillsboro) following the mass.

Interment will be 2:45pm at Mount Hope Cemetery, St Louis, Missouri.
To order memorial trees or send flowers to the family in memory of Richard R Creamer Jr., please visit our flower store.