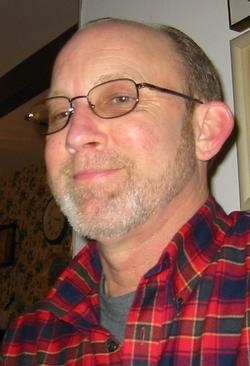 Kevin Gerard Haefner, 55, of Olathe, Kansas passed away Friday December 21, 2012 at Olathe Medical Center. Kevin was born September 18, 1957 and spent most of his younger life growing up in Hillsboro, Missouri. He was an altar boy at Good Shepherd Catholic Church, and spent very much time looking over the shoulder of his father to learn carpentry, plumbing, and electrical skills. Those skills served Kevin well throughout his lifetime; so much so that he later enjoyed casually teaching those same skills to young men that will follow in his shoes. Kevin was a craftsman in his own right, and anyone who knew Kevin will attest to that.

Many summers between school years were spent at the home of Lloyd and Leah Pigg where Kevin, his brother, and Mr. And Mrs. Pigg''s children were allowed to play in wooded country near Hillsboro that seemed limitless. Many long summer days were spent creating the dreams of the future, and many of those dreams came true. Horses, dogs, a swimming hole, and countless hours of freedom created an atmosphere of which Mark Twain wrote, and Kevin was allowed to enjoy. The Haefner family, as was Kevin, will be forever grateful to the Pigg family for their hospitality and love for those many years. They earned their place in heaven many years ago.
In the imagine of his father, Kevin was a kind and honest man; always able to turn the other cheek when life dealt its blows; but always capable of defending himself, or those he loved, when served an injustice at the hands of others. His work ethic was inspired by his parents who both worked countless hours to put four children through parochial school. The hours were difficult, but they were always there for the children, a gift Kevin never forgot. Vacation time was spent at a small lake cabin close to home where Kevin enjoyed his time in the woods with the family dog. Kevin very much loved life, and dogs. His best friend later in life was a beautiful black poodle he named Mindy. When Mindy passed, a little bit of him was lost also. Kevin and Mindy are now together again, and we know he will be happy with that forever.

Kevin is in heaven now, as he exemplified the teachings upon which he was raised. His kind heart, soul, and manners were things upon which we had grown accustomed; possibly taken for granted. Let us not forget the examples he showed us, let us embrace them and take them going forward in his name.

God rest his soul, and until such time we see him again, all our love.