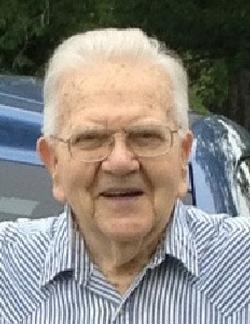 Judge Irvin Dale Emerson, age 92, of Hillsboro, Missouri, passed away suddenly on January 07, 2013, in Jefferson County, Missouri. He was born October 04, 1920, in Plains, Kansas. Irvin and his wife Betty of 65 years were married on October 25, 1947, in St. Louis Missouri. Irvin was an alumni of St. Louis University School of Law, where he earned his Juris Doctor, in 1951. Irvin retired from the bench in 1986 after serving as Jefferson County Prosecutor and a Judge of the twenty-Third Circuit Court, of Jefferson County, Missouri. He was an ordained deacon at First Baptist Church Hillsboro since 1964, member of Gideon''s International De Soto Camp, Rotary International (Paul Harris Fellow), The Missouri Bar, The American Legion, Hillsboro Community Civic Club, Hillsboro Cemetery Board, founding member of Hillsboro Volunteer Fire Association, former Hillsboro R-3 School Board President, and World War II Army Air Corp veteran.