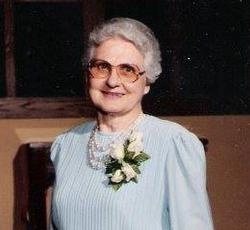 Isabelle Buechler (nee Speer), age 92, of Hillsboro, Missouri passed away at the Missouri Veterans Home in St James, Missouri, on July 28, 2013. She was born on April 30, 1921, in Russellville, Arkansas. Isabelle was a homemaker, longtime member of Good Shepherd Catholic Church, Ladies Auxiliary Knights of Columbus, Council #6401 Hillsboro, Missouri. She was a volunteer for Birthright and was a veteran of the Women''s Army Corps (WAC) serving during WWII.

Memorials: For masses or to the National Parkinson Foundation, would be appreciated by the family.
To order memorial trees or send flowers to the family in memory of Isabelle Buechler, please visit our flower store.