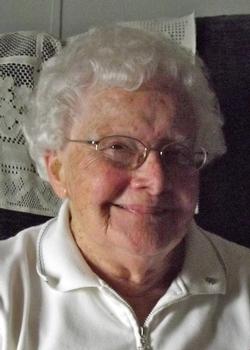 They were a hardworking farm family, although they never owned any farmland - yep, it was kind of like Grapes of Wrath in St. Louis and Jefferson Counties. The kids did chores before school and after school, and they ate meals from everything that grew from the ground or came from the farm animals. Including many pancakes.

Connie attended St. Andrews elementary school, where she drank coffee instead of milk because it was cheaper. It''s not a practice she recommends to any of her grandchildren or great-grandchildren. After graduation she babysat two bratty boys for 50 cents a day while continuing the farm chores. Later she became a live-in housekeeper for a well-to-do family in south St. Louis. She cleaned the massive house, made lunch for 18 employees of the packing house (sometimes half-inch steaks!), doled out shrimp cocktails every night, plus delivered cake and tea for the Ladies'' afternoon bridge club. Connie did miss life in "the country," and everyone ran to see "Sis" when she came home. At one point, she had three suitors who were best friends. Clarence Adam Wagner and his two other buddies had a boxing match on the day of his first date with Connie " he showed up with a black eye (partially concealed by his sister''s makeup) later that evening. Connie claims she "fell for him right then and there." They were married at Immaculate Conception church in Arnold on November 28, 1936.

They began married life in South St. Louis before moving to a two-family flat on Michigan Avenue in St. Louis. Clarence held many jobs and they welcomed their first child, Betty Ann. Sorrow came when the second daughter, Mary, died four hours after birth from hydrocephalus; Connie never stopped grieving for her. Clarence (Clank) and Phil were born after the family moved to St. Louis County. World War II called Clarence to boot camp in Portland, Oregon in the summer of 1944. The letters and postcards back and forth were numerous and humorous, but Connie felt that the family needed to be together. She packed up the two children and baby and took the Pullman train to Portland, something which amazes the grandkids today. Luckily, the war ended shortly before Clarence was to be shipped out, and they all moved back home, where a series of coincidences led them to Goldman, MO in 1946 and the only general store/feed and tack/tavern/gas station for miles. At "The Store," Connie and Clarence welcomed four more daughters, Margaret, Dianne, Anita, and Annette. Connie ran the store by herself while Clarence went to the city to sell and buy goods. She worked hard, carrying 50-100 pound bags of feed and 50-100 pound blocks of ice for customers, along with raising ponies, sheep, and chickens. The tavern out back was open all day, and she also pumped gas.

In 1959, they bought 111 acres of land off of Lake Tishomingo Road with a farm and farmhouse that was over 100 years old. Connie loved fishing, so Clarence dug out a 26-acre lake on the property that continually leaked. After building a home on the property in 1974, Connie fished every day. Her biggest catch was a 32-pound catfish that broke the net; she had to drag it up the hill to get it home. "The Farm" was a favorite family getaway for fishing, swimming, hay loft hide outs, red wagon rides, and chigger bites.

Connie spent much of her non-fishing time working with food and feeding people. Besides sporadic cooking for her seven children and 13 grandchildren, she could be found in the kitchens of the Hillsboro Horse Show, the Knights of Columbus'' Ladies Auxiliary, and organizing food pick up and drop offs for the St. Vincent de Paul Society in Hillsboro or the Hillsboro Food Pantry, which she and Clarence founded.
Holidays on The Farm often included her famous iced tea blend and gooey butter cake, and all the relatives created thousands of dishes to wash by hand. The smart ones ran downstairs to take turns pumping out tunes on the player piano. She feigned exasperation with a small grin and a wave of her hand.

Birds, dogs, cats, and flowers were also her passions. She cooked leftover meals for the dogs, doted and chided the cats, and fed the birds all year round. A variety of feeders hung off the deck overlooking the lake, and a bird-themed gift for Christmas or her birthday was always a hit. Each season brought a new crop of flowers around the house or the farmhouse; a bouquet was usually brought in after an afternoon of adventure, although she really didn''t like peonies in the house because of the ants they brought with them. Connie was a Bingo master, and would take on everyone in a game of Rummy or Uno, almost always winning with a shrug and a smile.

She once said that she felt closest to God when fishing off the dock at The Lake in the early morning hours, when the misty fog began to lift and the new frogs began to sing. I am sure they have a place like that in heaven ready for you now. Her sweet smile and kind ways will not be forgotten by anyone who knew her. We all love you and miss you.

Matthew 26, 28, 33: "Look at the birds of the air; they do not sow or reap or store away in barns, and yet your heavenly Father feeds them. Are you not much more valuable than they? "? See how the flowers of the field grow. They do not labor or spin"? seek first his kingdom and his righteousness, and all these things will be given to you as well.

Funeral Mass to be held at Good Shepherd Catholic church, Hillsboro, MO at 11 am.

In lieu of flowers, please donate service hours or monetary gifts to the St. Vincent De Paul Society, The Hillsboro Food Pantry, the Hillsboro chapter of the Knights of Columbus, or celebrate a mass in her honor. Thank you.
To order memorial trees or send flowers to the family in memory of Constance (Connie) C. Wagner , please visit our flower store.