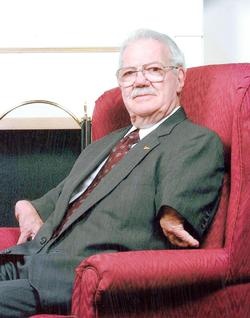 Charles Victor “Charlie” Vreeland, age 94, of Hillsboro, Missouri, passed away on Sunday July 09, 2017, in Crystal City, Missouri. Charlie was born June 16, 1923, in St. Louis. He was the son of the late Floyd and Elsie Vreeland (nee Callewaert). Charlie married his wife Audrey of 65 years on January 12, 1952, in Hillsboro. Charlie earned a Degree in Secondary Administration from South East Missouri State University and a Masters Degree in School Administration from the University of Missouri. He was the former longtime City Administrator for the City of Hillsboro for 65 years, Treasurer of the Hillsboro Special Road District, former History Teacher, Basketball Coach and school board member for Hillsboro R-3 for many years. He was a former board member for Eagle Bank and Trust for 34 years, former member of Hillsboro Rotary, former partner of the family owned Vreeland’s Clover Farm Store and member of Good Shepherd Catholic Church. During his lifetime Charlie mentored and inspired many people along the way. He was truly a gift to the Hillsboro community and will be dearly missed.

Also survived by his Great Grandchildren-Alyssa and Emma Eye.

Morning Prayers and Eulogy-Wednesday, July 12, 2017, at 10am in the Robert D. Brown Funeral Home Chapel.

Memorials to-The Fletcher House Foundation, American Heart or the Hillsboro Park would be appreciated by the family.

To order memorial trees or send flowers to the family in memory of Charles Victor "Charlie" Vreeland, please visit our flower store.