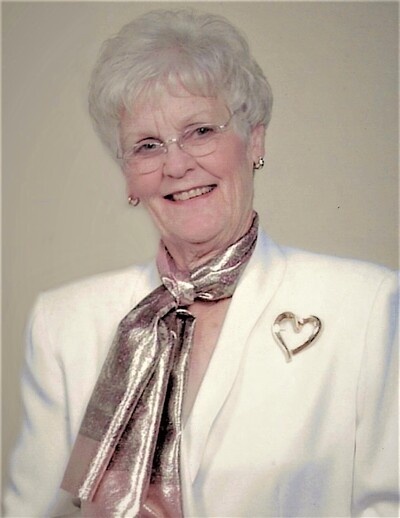 Audrey Marie Vreeland – a devoted wife, mother, champion of furry and feathered creatures, and a fierce advocate for underdogs of all shapes and sizes – died peacefully on Monday, April 20, 2020, at her home in Festus. She was 89.

Mrs. Vreeland lived most of her life in a modest home in Hillsboro with a lovingly landscaped yard and gardens. The house is located on Vreeland Road, so named by the Hillsboro Board of Aldermen about a decade ago in recognition of the public service and love of community demonstrated over a lifetime by Mrs. Vreeland and her late husband, Charles.

Charles, who died in July 2017, had served as City Clerk and City Administrator in Hillsboro for, remarkably, more than half a century.

Audrey shared his love of civic engagement and hopeful community-building. She helped found the Hillsboro Chamber of Commerce and was one of the organizers of a Hillsboro Sesquicentennial Celebration, which evolved into an annual heritage and music event.

Mrs. Vreeland was an enthusiastic local historic preservationist, adorning period costumes and baking many a fruit pie for fundraisers to benefit Hillsboro’s Thomas C. Fletcher House. (Her husband once famously outbid friends for his wife’s pie, donating $60 for the pie that had just an hour earlier left the oven in their kitchen.)

The Vreeland's were also renowned as amateur bird watchers, setting up an impressive medley of feeders, baths, and nesting houses and stocking the feeders with every imaginable seed. They spent hours watching the bright-colored avians they coaxed and comforted.

But if you asked her, Mrs. Vreeland would say that her most important contribution was raising three children – Karen Eye (Paul), 67, of Florissant, Mo.; Beth Vreeland (Dennis), 57, of Festus; and Eric Vreeland (Emily), 56, of Knoxville, Tenn. – and instilling in them confidence, a strong moral code, and empathy for others.

Mrs. Vreeland was preceded in death by her parents, Roy and Gertrude Mundwiller of Festus, and an older brother, Gene Mundwiller, of Florissant.

Survivors in addition to her children include grandchildren Ben Eye (Amanda) of Ladue, Mo.; great-grandchildren Alyssa & Emma, Josh Eye (Scott Green) of Alton, Ill., and Cassandra Eye of Overland; a sister, Joan Rogers, of Festus; and a brother, Carl Mundwiller, of Tuolumne, CA.

Visitation, Funeral Mass, and burial will be private.

A public celebration of Mrs. Vreeland’s life will be scheduled at a later date.

To order memorial trees or send flowers to the family in memory of Audrey Marie Vreeland, please visit our flower store.